How was the New York Marathon? Here’s my story.

I still get chills when I think about the NY Marathon.  From the support of the entire city for the runners (every cabbie asked me if I was running and wished me luck), to awe of the thousands of runners crossing the Verrazano Bridge at the start, to the massive crowds through the entire 26.2 mile course shouting kudos and support.  Here’s a snapshot of the NY Marathon 2010 experience.

Thursday, November 4th.  Early morning flight from SFO to JFK.  While standing in line to board the plane, I got into a conversation with another passenger.  She was running the marathon too.  Several others on the flight were also signed up.  We were all brimming with excitement and anticipation, swapping details on our village color for the start and wave time. 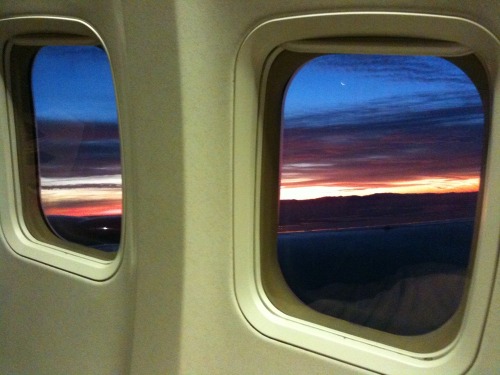 Sunday, November 7th.  Daylight-savings time meant the clocks went back one hour but it also meant my iPhone alarm went off at the wrong time due to a bug in the software.  I also had a wakeup call scheduled, so I was awoken at 3am, 4am and 5am.

I was filled with nervous energy – wondering if my ITB injury would sideline me, if I could make my goal time of 3 hours 59 minutes and 59 seconds, if I would qualify for the Boston Marathon, if I would hurt, if I would bonk, if I’d be too cold, too warm, etc.

As I descended the elevator of the hotel, I met other runners geared up for the start.  I hailed a cab and noticed every yellow cab was heading the same direction, with a bundled up runner in the back.

I was dropped off at my pre-assigned commute location – the Staten Island Ferry Terminal – and joined the throngs of runners boarding the ferries.  Once on, I sat down and snapped this photo below of the sun rising over the city on a crisp, clear Sunday morning. 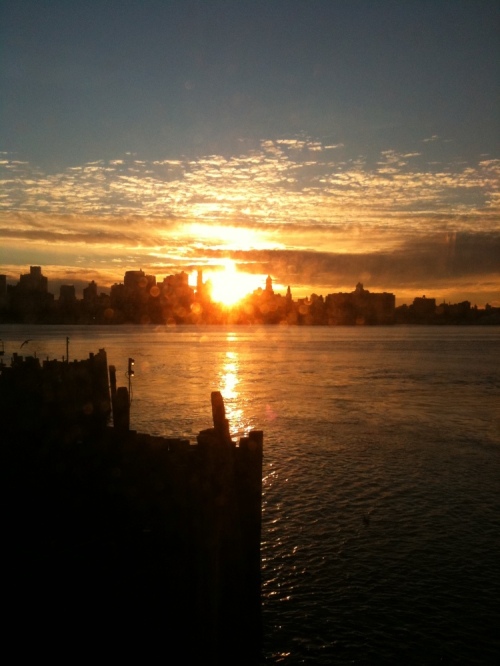 After departing the ferry, we filed along to meet a fleet of chartered buses ready to take us to the start.  It felt like a family of a thousand as we all walked slowly together to the buses, talking about where each of us were from, how many NYCMs run before, isn’t this experience cool, etc. 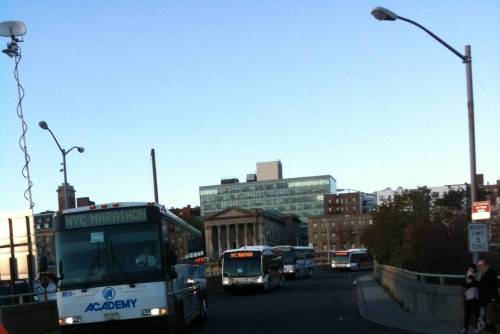 As the buses dropped us off, the crowds filed up the hill to the start villages.  We were pre-assigned a starting area – I was in the blue village with a Wave 2 start time of 10:10am. I got to the village holding area around 7:45am, so I had a bit of time to fill. 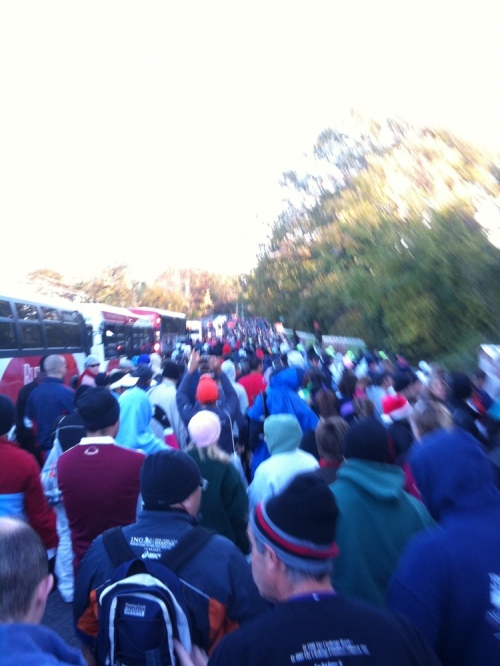 I tried to find someplace to hang out, but the tents were jam packed, so I unwrapped my packs of hand warmers I got at REI and stuffed them into my gloves, shirt, pants and jacket.  I was  wearing several layers of clothes that I planned to ditch in the start corral, as they would be donated to charity.  I had on my running outfit (CW-X capri tights, a shimmel, and long sleeve top), plus a pair of sweat bottoms, turtleneck, long-sleeved Seattle Marathon top (it was too big, so it was time to go), SF zip-up hoodie, and my North Face fluffy jacket).

In each village a slew of UPS trucks were ready to take our baggage to the finish line.  Around 9am, I went over to the truck which corresponded to my bib number and checked in my North Face jacket and gloves so that I could be toasty at the finish. 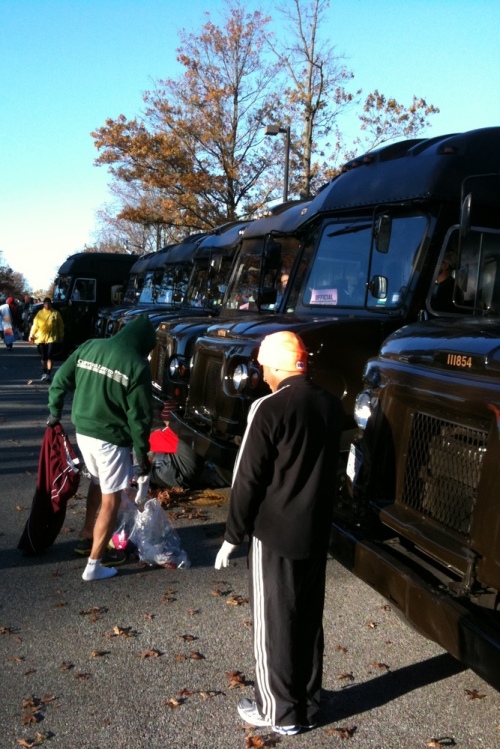 At 9:15am, those of us in Wave 2 were called to our corral.  It was funny to hear that everyone around me was sporting an injury.  One girl had just been knocked over by a bicyclist 2 weeks ago and sustained a concussion.  A guy next to me had a sprained ankle.  I told them about my ITB injury and a guy told me how debilitating his had been.  Hmmm, not exactly what I wanted to hear at that moment, but oh well.

At 9:40am, the crowd started moving.  OMG – we’re getting ready to
start!  I started my active warm-up exercises as directed by my physical therapist.  Right on!  No pain in my knee!   Maybe I can make a PR (personal record) and BQ (Boston Qualifier)!

Here we are at the start (below). Double-decker buses were on either side of us.  Overhead, helicopters and planes bearing signs flew by.  It was a crisp 39 degrees F.  A bit chillier than I’m used to (lowest temp I had run in was 50 degrees), but the anticipation and adrenaline warmed me up. 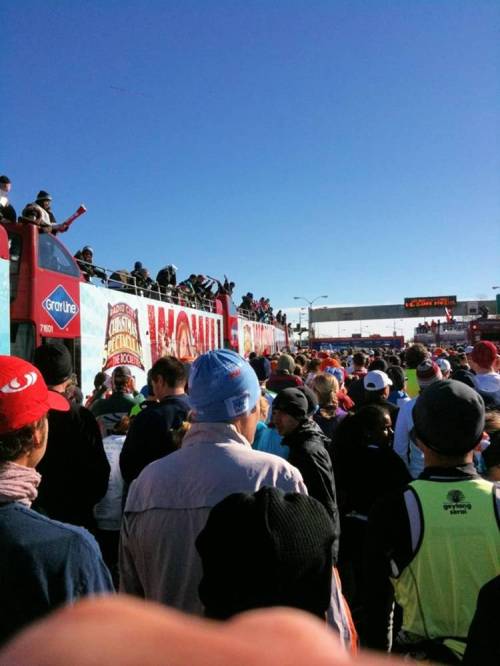 The announcer started to count down to the start… Then, a cannon went off; a cloud of smoke dispersed into the air and Frank Sinatra’s New York, New York blared out of the speakers.  “Start spreading the news,” he crooned! Runners cheered, sang and leapt for joy as we started to slowly move towards the start line.  I couldn’t believe it – four months of training and here I was – running the world famous New York Marathon!  I could see thousands of runners already ahead of me, filling the entire span of the bridge like a moving blanket of spandex-clad athletes.  45,000 strong.  And I was one of them!

The first 13 miles flew by like I was running on air.  I had planned to run 4 minutes and walk 35 seconds for the first 18 miles, but with the crowds lining the streets, I felt awkward walking so I decided to just walk during the water/Gatorade stations.  I felt good for most of the race, aside from the occasional twinge in my knee or hip, reminding me that my ITB was doing me a huge favor today.

By mile 18, I joined up with the 4 hour pace group and let them guide me.  Being with them was great, as it let me relax and not worry about my pace.  However, there was one girl who kept cutting across me and others in the group.  She really annoyed me as she was so dangerous.  After about 4 miles of this behavior, I started imagining how I would yell at her but then realized I was expending unnecessary energy, so I distanced myself from the group.  At mile 23, the gap became too great so that I couldn’t catch them anymore, then I felt frustrated and defeated.  I didn’t have enough energy to catch up, which meant I’d fail to BQ and PR.

At mile 25, I decided to stop at the Gatorade station to quench my thirst.  I then got back out on the course and plodded along until I saw the “800 meters to go” sign.  Hooray!  I’m almost done!!! I checked my watch and saw it said 3 hours 57 minutes.

WOW – maybe I can still make my PR after all!  I tried to run as fast as I could up the hill to the finish.  I hurt so bad – my hip and knee were both very cranky but I was so close.  I saw a person holding a sign that said “Pain is temporary, finishing is forever” and I thought, YES, I can do this.  I tried to find an open space where I could run across the finish line (the entire 26.2 miles were packed with runners) and concentrated on accelerating.  I crossed the finish, glanced at my watch, and saw 4 hours flat. 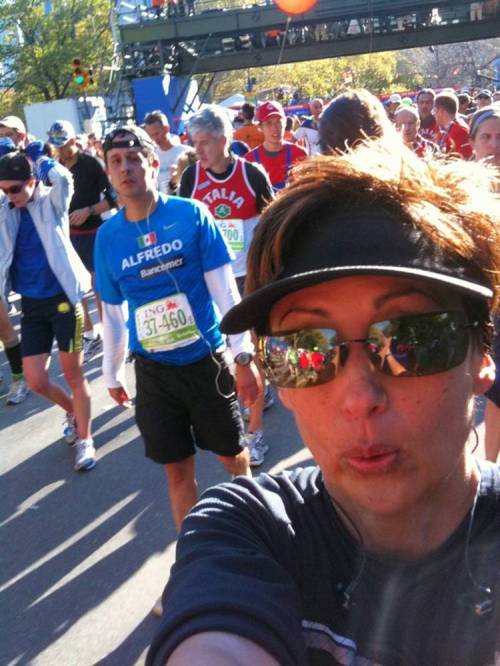 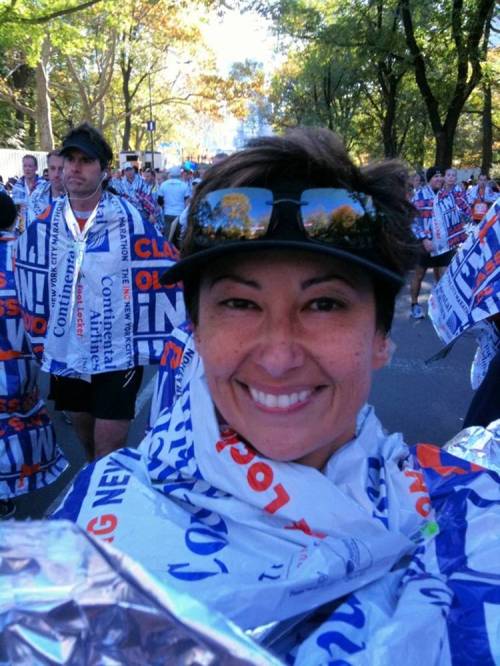 A very nice volunteer wrapped the mylar blanket around me and taped it closed.  I was so grateful to her.  I hobbled on for what seemed like another mile to find my UPS truck so I could get my fluffy jacket and warm up. 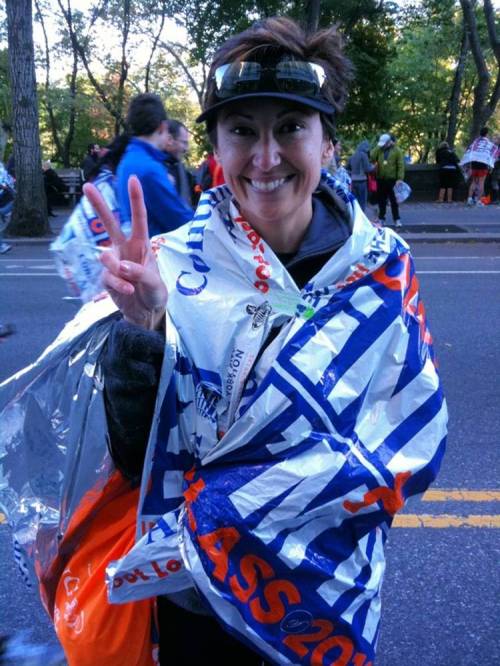 Due to the masses of people trying to find their loved ones, AT&T circuits were full and I couldn’t complete a call to Dominic.  Luckily, one text finally went through and we found each other about an hour after I had crossed the finish line. I was so happy to see him!  And he had actually seen me on the course, as he had been tracking my progress with the NYM iPhone app, thus he knew when I would be finishing.

I looked like a granny duck as I we walked back to the hotel – hobbling from side to side very slowly – but I was so proud.  No amount of pain could take away my sense of accomplishment.  At 45, I ran my fastest marathon ever, and I qualified for the venerable Boston Marathon.  (I’ll be registering for the 2012 race, as the 2011 race is already full). 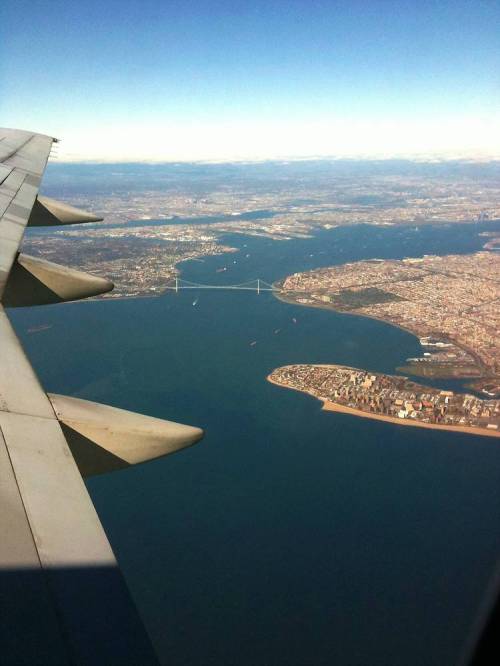 I loved the entire experience of the marathon.  Here’s a shot from the plane as we were leaving NY, heading back to SF.
You’ll see the Verrazano Bridge in the distance.  Yep, I crossed that, and the five boroughs of New York City on chilly, clear Sunday morning.  I highly recommend it.  It’s a thrill of a lifetime.