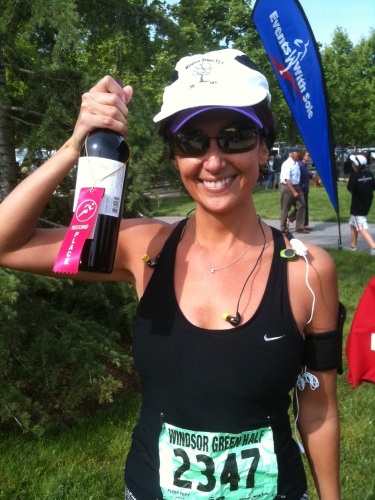 Dominic asked me before the race how I thought I’d do and what time I was aiming for.  Given I was coming off of two injuries (my nagging shin splint in my right leg and a pulled calf muscle in my left), I told him I just wanted to run the best that I could and just keep it relaxed with no time in mind.  In my last run, I was able to accelerate about half way through an 11 mile run and was feeling good, so I knew I had the potential to at least near my 1:52 best so far in a half, but I didn’t want to stress myself out since the last time I aimed for a specific time (sub 4 hours at the LA Marathon), things didn’t work out.

The conditions in Windsor were perfect for the race.  When the gun went off, I tried to find a good spot in the crowd to let the excitement pass.  I checked my watch and saw I was running around an 8:04/mile, which was too fast, so I eased my pace a bit and told myself that if I reached mile 5 or 6 and still felt good, I could punch it up a notch.

Around mile 4, I was grouped with two older male runners who both looked strong.  We had a good clip going and were passing up some of the younger runners around us.  This portion of the race was a bit hilly and I noticed one of the men kept passing me on the uphill, while I passed him on the downhill.  After the 4th hill, he transitioned to a walk.  I patted him on the shoulder to encourage him to keep going, and he smiled and gave me the thumbs up as I passed him.  I never saw him again.

I stayed focused.  Breathing steadily.  Letting my arms tell my legs to keep up the cadence.  I didn’t slow much on the uphills but kept up a steady pace.  It was incredibly gratifying to see runners ahead of me, knowing I could eventually pass them.

The mile 6 marker came and went and I turned it up a notch.  I was passing lots of people for the next few miles.

When I got to mile 9, I was starting to fatigue.  I wondered how long I could keep up this pace (I had Nike+ calling out the mile markers and my speed in my headphones and knew I was hovering between 7:40 and 8:30 pace).  At mile 10, I saw an older lady in front.  I wanted to pick her off, knowing she might be competition in my age group.  I passed her, but then she stayed on my tail.  Ugh!  Go away!  Let me beat you!  It took a while, but I shook her off.  When I was at Mile 11, I was really huffing and puffing and the competition wasn’t letting up.  I didn’t pass so many people anymore.  In fact, another lady that I thought was older than me passed me as I picked up a drink at the water station.  Dang!  I only took a tiny sip and tried to catch her but she was flying.

Mile 12 was hard.  I decided to skip any more water stations as I knew that trying to drink was slowing me down.  A guy was running right in front of me and kept checking his watch every 20 seconds.  I knew he was hurting.  So was I.  But the end was nearing and I couldn’t stop now.

I looked at my watch – half a mile to go! I could hear my spinning coach Andy’s voice in my head – “You only have 4 minutes left and then you’re done.  You can do it!”  Yes, yes, only 4 minutes.  I can survive it!  As we turned the corner to the finish, I accelerated, but I started a bit too soon for my lungs and legs, as both were searing with pain.  I thought I was going to lose my breakfast as we entered the final stretches and the crowd closed in.

Heaving for air, I tried to step it up for one final push.  I didn’t know what my time would be, but I figured it would be okay.  I sprinted those last couple of seconds, which felt like hours.  And then, the finish line.  I turned off my watch and couldn’t believe what it said.  1 hour and 44 minutes.  Fully 8 minutes faster than my previous personal best.  Really?!  How could I be so much faster?!

Dominic greeted me and I was so proud to see him carrying a bottle of wine with a blue 1st place ribbon on it for taking the first spot in his age group.  I wondered how I did and when I learned I came in 2nd, I was thrilled!!

I never thought I’d be able to break a sub-1:45 half, but I did it!  Now, if I could only reach that sub-4 hour marathon…. I’m not stopping until I do! (Guess I won’t stop then either, but I really really want to reach that goal).